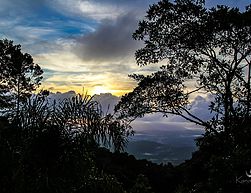 The RPPNs contained in each property are managed by Instituto Uiraçu, through agreements with the owners. In addition to managing these private reserves and its own, purchased through donations, the Institute aims to extend the protection to the entire Bonita Serra, one of the last remnants of submontane forest in the region, which covers an area of about 7,500 hectares in the municipalities of Camacan and Pau Brasil, Bahia.

Know the location, climate and more about the SBR: TRAITS

Know all about the studies and research carried out at the SBR: BIODIVERSITY

Find out what the SBR offers visitors and researchers: FACILITIES

TRAITS - LOCATION AND HOW TO GET TO THE SBR

The Serra Bonita Reserve is in the municipality of Camacan, in the cacao region of Southern Bahia, 80 km from Itabuna, 135 km from Ilhéus and 235 km from Porto Seguro. The access branch to the Reserve is 10 km from Camacan, on the road to Jacareci; taking a left at the sign written Reserva Serra Bonita, another 6 km up the road to the towers. See the map on the right (click to enlarge).

It is important to note that from Camacan, transportation to the Reserve must be done by 4WD vehicles, since other kinds of vehicles typically do not support the ride up the mountain, may become severely damaged and subject to towing.

Serra Bonita has a unique habitat with significant altitude gradients of native Atlantic Forest (200m to 950m above sea level). Sharp variations in humidity and temperature are found in vegetation, which switches from a wood of evergreen to semi-deciduous humid forest at lower elevations.

Still well conserved, about 50% of the area is covered by pristine forest of utmost importance. The rest of the area is a mosaic of forests in different stages of succession, with large secondary forests in advanced stages of recovery, interspersed with cabrucas and small pastures.

The forests of Serra Bonita protect numerous springs that supply clean water to the populations of Camacan and Pau Brasil. Southern Bahia is a priority area for conservation in the Central Biodiversity Corridor of the Atlantic Forest; it contains some of the highest rates of endemism in the world. Numerous species are endangered and in need of urgent protection. In the 1990s, the New York Botanical Garden identified a record of 458 tree species in a single hectare of forest (an area the size of a football field) in this region.

The predominant weather at Serra Bonita is wet and rainy most of the year, with a dry season and occasional rain between October and March.

Temperatures range between 10 and 32 degrees Celsius, according to the altitude and time of year (colder in June, warmer in December).

The subterritory of Camacan includes the municipalities of Jussari, Arataca, Camacan, Pau Brasil, Mascote and Santa Luzia, and has a population of about 94,500, of which 68% live in rural areas. The economic base of the region is agriculture, for many years dominated by cocoa production, under a system called "cabruca" where cocoa trees are planted under the canopy of the original forest. Thus, this crop has less impact on biodiversity and although clearing the land for cocoa plantations eliminates much of the lower vegetation, it spares large trees like the jequitibá, the mahogany, rosewood and Brazil wood, now endangered. These species have survived, in the cocoa region. 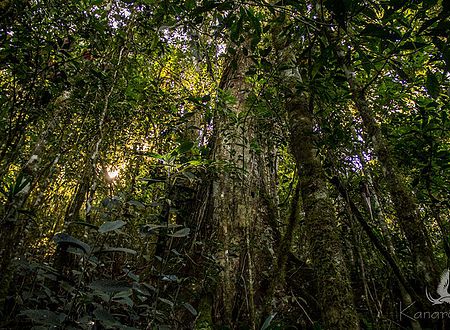 During the height of the cocoa trade, South Bahia was a major global producer of this fruit. However, in the 1980s, a sharp price fall in the international market and the appearance of the witch's broom disease, which devastated cacao plantations, led to a severe economic crisis throughout the region.

This resulted in a sharp increase in poverty due to mass unemployment, caused by the economic recession, which in turn caused a severe impact on the region's biodiversity. Hunting, trafficking of endangered species of flora and fauna, the replacement of vast areas of cabruca for more intensive cocoa plantations, the introduction of exotic species and other threats increased.

The crisis finally led to the expansion of illegal logging and significant acceleration in deforestation, with the replacement of cocoa by other land uses such as shaded coffee, pasture and, more recently, eucalyptus plantations.

The Serra Bonita Reserve, in this context, is an essential contribution to the preservation of the Atlantic Forest, through the full protection of one of the last remnants of moist submontane forest in the Atlantic Forest´s Central Biodiversity Corridor, and its endangered, rare and endemic species.

Studies and surveys of the Serra Bonita Reserve´s fauna and flora are conducted by universities and research organizations, in partnership with Instituto Uiraçu. We want to know the Atlantic Rainforest, in order to protect the biome and its ecosystems.

By 2015, over 50 research projects have been completed or are underway at the Serra Bonita Reserve. Twenty new species of flora and fauna have been identified, and 27 species of endangered birds have been recorded. Many other endangered species, not listed yet, still exist at Serra Bonita.

The goal is to make the Serra Bonita Reserve an international reference in research on the Atlantic Forest, an advanced field station for universities all around the world, and a reference as a place for watching birds and megafauna.